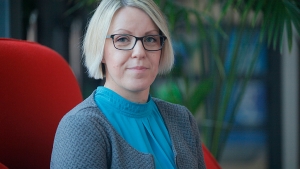 Hanna Karkulahti works at Genip Oy as an IP assistant.

She is responsible for our invoicing and accounts payable and also manages our office in Kotka.

Ms. Karkulahti started to work at Genip Oy in January 2012.

Before joining the Genip Oy team, Ms. Karkulahti worked as a specialist in billing at a forest industry company Stora Enso Oyj in Kotka.

Ms. Karkulahti worked between 2003 and 2011 as a traffic controller at a logistics company ILP – International Logistics Partners Oy in Kotka.

In 2000 she also worked as a department secretary at Fortum Oil and Gas Oy at Exploration and Production Department in Espoo.